THis Blog has Moved to www.silvergoldsilver.com!

THis Blog has Moved to www.silvergoldsilver.com! 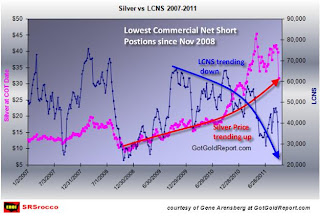 After the big selloff in silver over the past two weeks, the commercial net short position has dropped to levels almost as low as they were in Nov 2008 when silver was at $9.00 an ounce. The COT Report shows these figures on every Friday from positions held on the close of trading on Tuesday. There are several categories of traders, but the most important are either the Large Speculators or the Commercials. The large speculators are big hedge funds and etc. The Commercials are the bullion banks themselves. JP Morgan is famous for holding the largest percentage of Commercial shorts of all the banks.

In these two main categories, there are LONG and SHORT positions. If someone is long, they want to price to head higher, if they are short they are hedging their positions or they want the price to go lower. When there is a great deal of short positions, it normally means the price will be heading lower at some point. When the total short positions are low, the opposite is true.

In the graph above the term LCNS stands for subtracting the Commercial Longs from the Commercial Shorts, which gives us a Commercial Net Short Position. Here we can see that after the big selloff, the LCNS is now almost as low as it was in 2008. Now that a good percentage of the LCNS have been liquidated, a firm bottom may be taking place.

Also if you notice over the past four years the LCNS line (blue color) has been above the price of silver line (Pink color)…especially when silver hit $21 in March of 2008. That trend is now firmly below the silver price line and I believe it will remain there until we finally get our COMEX SILVER DEFAULT.

Silver Eagle Sales Continue to Fly off the Shelves 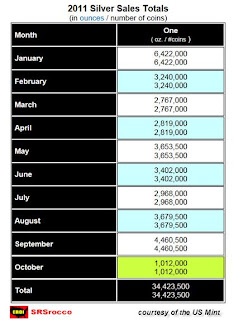 October turned out to be the second best sales month behind Jan. Already in the first three business days of Oct, the US Mint sold over 1 million silver eagles. This averages out to about to 330,000 silver eagles sold by the US Mint a day. If the price of silver falls from here, we could see that daily sales figure move upwards of a half a million. Even at an average of 200,000 in October, that would be over 7 million for the month. I don’t believe the US Mint has this sort of capacity. So, if the price of silver continues to fall to the $26-$27 level, I would bet the US Mint will have to suspend the sale of the Silver Eagles until 2012.

The United States produced 38.5 million ounces of silver in 2010, and it looks like the US Mint just might sell over 40 million silver eagles in 2011….more than the total U.S. domestic supply. Some have said that by law the US Mint must use silver mined in the United States. This is no longer true. I spoke with the Public Relations person at the US Mint a few weeks ago and he told me that in 2002, the Senate came up with a new law that allows the US Mint to purchase silver for their rounds from other sources.

The authorizing legislation for the American Silver Eagle bullion program stipulated that the silver used to mint the coins be acquired from the Defense National Stockpile with the intent to deplete the stockpile's silver holdings slowly over several years. By 2002, it became apparent that the stockpile would be depleted and that further legislation would be required for the program to continue. On June 6, 2002, Senator Harry Reid (D-Nevada) introduced bill S. 2594, "Support of American Eagle Silver Bullion Program Act," "to authorize the Secretary of the Treasury to purchase silver on the open market when the silver stockpile is depleted." The bill was passed by the Senate on June 21 and by the House on June 27 and signed into law (Pub. L. No. 107-201, 116 Stat. 736) by President Bush on July 23, 2002 (source-Wikipedia)

This might seem bearish for the price of silver as the so called “DEFLATIONISTS” keep regurgitating this over and over. Very few analysts realize we are heading into a Hyperinflationary Depression…and not a deflationary one. It’s fricken hilarious to hear on CNBC and etc that this week is deflationary because Ben isn’t printing money…or next month will be inflationary because he is. That is all BS folks. Don’t forget what the biggest aspect of hyperinflation is….and that is the “LOSS OF FAITH IN THE CURRENCY”. You don’t need continued printing to make inflation…you just need loss of confidence and the whole house of fiat cards comes tumbling down.

It’s time to get your physical silver before the rest of the world wakes up from the nightmare that nicely printed Monopoly money and US Treasuries and not safe havens, but rather a Ponzi scheme several hundreds of thousands of times worse than Bernie Madoff.
Posted by silvergoldsilver at 8:31 AM 85 comments: 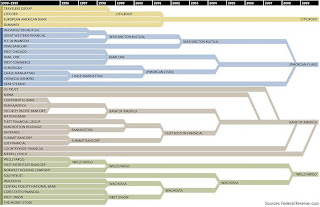 Posted by silvergoldsilver at 12:18 AM 15 comments:

While the rest of the world in Canada watches the opening NHL game Montreal vs Toronto, I will spend some time on here and take a look at what the hell is going on, as to calm some confusion and offer some hope.

Firstly, today I presented a few trades, and literally pin pointed the SLV long today...follow the minute chart, I told you guys to buy after a breakout over the $30.35. At first attempt, it hit the .35 and then they smacked it in the early session, then we broke out and everyone should have enjoyed that profit of 3-4% within hours. I also notified you about the SVM trade and it riding the MA. I would now also like to point out that if its such a massive mega fraud, why has the short interest declined from 22 million to 1 million in 2 weeks? Right, go back to my Shorting 101 article. Those who pitched your calls or longs you live and learn. Even when my calls were down 80% on it, I never pitched all of them. There is a time and place for selling, I doubted from the first sniff at the anonymous letter that it was all bullshit. Hopefully KPMG can release their findings and put this to rest so we can see $20 by year end if the equity market doesn't go to zero first.

So what happened to all my bearish bank stocks? Like TD, MS etc. Well, not even I can forecast an equivalent of $1 trillion being printed by the ECB today. Whenever you have central bank intervention in the 'free' markets, your plans go to shit, you eat short term losses and move on. Although the overall downside channel trend remains intact for the financials, it will be tomorrow's BLS # that separates the men from the boys AND will start the next leg movement EITHER way.

Today Tinka touched an intraday of .26 cents, when yesterday I bought some .25's. 28% today later I thank anyone who pitched them into my bid. I told you that the bid would get aggressive on THURSDAY. I guess today was THURSDAY not yesterday's Wednesday, THURSDAY. Again, Tinka's results were based on holes that are NOT being drilled on the chimu land. People who placed their bets and lost move on, those that are in now or remain resilient, lets see what happens. All juniors got smoked the past few weeks. Tinka was never going to be an exception to this junior tier liquidity rule. They never do, ever. So lesson learned in junior mining shares.

The physical metal scene has been working exactly like I said it would on its negative feedback loop. A quick eye would see that the customer withdraw at the comex today registered a 1,052,240oz. Not bad, havent seen this in a while.

As I type this I am looking at the finished new site. Its done. Testing is commencing. My programmer pulled through, and we are doing our best to get this live asap. I'm not going to give a time or day, just know at any time you refresh this, the live link may pop up and take you off to the virtual play ground...we will be giving away some silver maples, and you will be notified on how you can accumulate your phyzz stack (hint hint).

So off I go to get this thing wrapped up. And as a reminder, all irrational low volume exuberance ends badly. Dont make the mistake and by the tops of descending channels. Let it break out WITH some fabricated good news, let it come back down and support its breakout, then trade it. Dont chase charts.

Got Volcker rule? Will never happen, but there is always a glimmer of hope for the good guys..Click here to see article...

Those thinking the the world is saved today, here you go:

Posted by silvergoldsilver at 7:57 PM 42 comments: